Brainspotting Unlocks the Riddle of Trauma 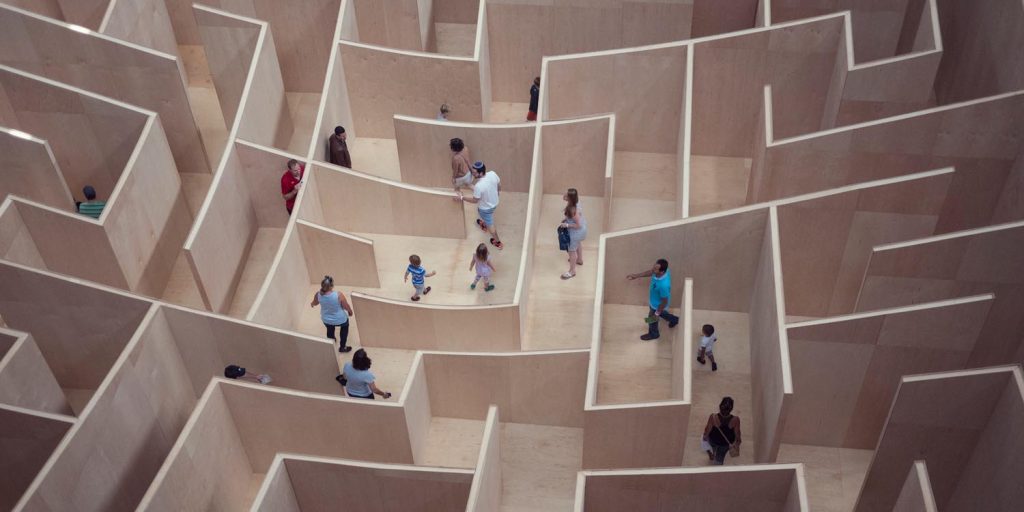 Jason came to see me 25 years after a horrific, unspeakable event occurred in his life.

At the time, I was a trauma therapist in NYC. When Jason and I met, neither of us could have guessed that the new mind/body therapy I was using, would expose a shocking secret. Brainspotting unlocks the riddle of trauma. It would help us solve a puzzle, cure Jason’s symptoms, and conclude his treatment—after only three sessions.

Twenty-five years earlier, five strange words had saved young Jason’s life.
Riding his bike through a secluded park one day at age 10, a large man jumped out, knocked Jason over, and dragged him into the woods.  The man forced Jason to perform oral sex, muttering over and over that he was going to kill the boy.  The man was about to rape him when Jason turned around, looked his attacker straight in the eyes, and slowly and clearly spoke the five words that changed everything:

Upon hearing Jason say these words, the man looked up, stunned and confused, cursing profusely, shoved Jason to the ground, and ran off.

The strange thing was, Jason’s mother had NOT died.

In fact, his mother was very much alive and well at the time. Even Jason was mystified about the origin of those spontaneous, life-saving words.

When he first arrived at my office, Jason didn’t even mention this horrific childhood trauma. Instead, he was frantic because he had flunked the pharmacist licensing exam three times after recently graduating from Pharmaceutical College. With only one more chance left, Jason believed he was “too stupid to pass.” He desperately needed some assistance. And I hoped that Brainspotting could help him.

So…what in the world is Brainspotting?

Shakespeare once famously said, “The eyes are the windows to the soul.”
It turns out he was right!

Brainspotting (BSP) is a brain/body-based psychotherapy approach that uses the eyes and the field of vision to find where a person is holding trauma, or any negative experience, in their brain, and then bring that information to resolution.

Brainspotting was discovered by Dr. David Grand in 2003. Dr. Grand noticed when his clients were upset or “activated” by a specific issue or event, focusing their eyes on certain eye positions caused some very noticeable reflexive body reactions (like blinking, sniffling, swallowing, body twitches, yawning, etc.). He eventually reasoned that reflexive body reactions on specific eye positions were trying to tell him something—that these “Brainspots” might be indicating the location of the troubling material in the brain. By holding the eyes stationary on these spots, he and his clients noticed a spontaneous and remarkable resolution of the troubling material.

Trauma is stored in the mind/body, almost like a “time capsule” buried and then dug up many years later to see the artifacts of that earlier time. When a person has a flashback to a frightening or troubling event in the past, it’s as if that time capsule has suddenly broken open. The person sees and experiences the traumatic event exactly as if they’re still back there, helpless and terrified.

Dr. Grand also discovered that if you are activated (i.e., frightened, anxious, distressed, angry, sad) by something that is bothering you, you will experience those feelings even more intensely by focusing your eyes in one direction rather than in another direction. (“Where you look affects how you feel”) So if you hold your eyes on the one pinpointed spot where you feel the highest emotion (a “Brainspot”) and observe what’s going on inside you (called “processing”), your brain will first locate where the activation is held in your system, and then start to resolve it. It’s a sort of unwinding process in which Brainspotting unlocks the riddle of trauma and releases it forever.

Brainspotting unlocks the riddle of trauma to solve Jason’s mystery

During Jason’s first session, as we talked, I immediately noticed two things: Jason was very self-critical, and he was extremely tuned into people’s faces and facial expressions. He was absolutely certain, for example, that strangers often stared at him in public with scorn and pity, as if they thought he was a “pathetic big loser dummy.” Since Jason was obviously a very bright young man, I was mystified by the origins of this unusual distortion.

When I asked about his history, Jason reluctantly told me the story of his traumatic childhood assault in the woods. Sadly, he had felt too ashamed to tell anyone, and had kept it a secret even from his parents. And as he grew up, Jason told himself that if he’d been “normal,” he would have physically fought off his assailant— instead of saying five words that were “wussy and dumb.”

Still furious at himself about those “pathetic, cowardly, stupid” words that had saved him, nothing could convince him otherwise. Over time, Jason had internalized his salvation not as miraculous but instead as confirmation of his own shameful weakness and stupidity. Jason did NOT want to focus on this shattering experience, sure that it had nothing to do with his inability to pass his pharmacy exam.

In our second Brainspotting session, I suggested that Jason close his eyes and imagine that he was seated in the exam room preparing to take the test. He should allow himself to get “activated” – to really feel the emotions and body sensations as he visualized taking the exam. Jason almost immediately reported feeling intense panic, mostly in his hot, flushed face and upset stomach. His symptoms were severe enough that he feared he might vomit, and the degree of his terror was a “10” (the highest level of distress).

To locate a Brainspot for these feelings and body sensations, I guided Jason’s eyes by holding a pointer and moving it slowly across his field of vision—stopping and holding the pointer still at various eye positions. As he looked at one particular spot on his left side, I noticed reflexive body signals—Jason’s face flushed deeply, his eyes watered, his breathing became rapid, and his foot wiggled! Jason confirmed that this indeed was the spot that made him feel the most panicked and nauseous.

We stayed on that Brainspot for several minutes as he continued to stare at the pointer.

“I’m being attacked! I’m standing up against a tree. He’s got me by the throat! I can’t breathe!”

As he spontaneously revisited this scene, his breathing became more rapid and labored. (Jason was having a flashback.)

In the next moment, Jason said,

“I knew it was hopeless, and then those words, “My mother just died yesterday,” came out of my mouth.”

Still staring at the spot, Jason fidgeted and shifted in his chair, then said:

“I can see his face, I can see the exact facial expression of that man who attacked me! “

Jason stared at the pointer for several more minutes.

He was quiet for a moment, then continued:

“Now he looks disbelieving and shocked, like I’m challenging him in a way that he didn’t expect. He is looking at me like I’m nuts!”.

“Wait a minute, the man’s face looks hurt, like I’ve hurt his feelings!
That makes no sense whatsoever…”

“My father always had to control everything. He couldn’t stand to be challenged. My older brother finally took a stand and totally rebelled against him by moving out and leaving home way too young – and my father was completely heartbroken. After that, my father always looked so hurt and defeated. So I decided I would never challenge or fight with my father, no matter how angry I was. I NEVER wanted to hurt my father like my brother did…I just couldn’t ever bear to see that hurt face.”

“I just realized I was protecting that man from my rage, just like I protected my father…”.

“Oh my god. That thing I said to that man…
“I said something sort of soft and sad…so I wouldn’t hurt his feelings! So he wouldn’t think I was challenging him, so he’d just leave me alone!

“ I looked at that man, and I saw my father’s face, and it saved my life.”

When terrible things happen, grief, extreme fear, and pain are sometimes so overwhelming that the traumatic experience stays frozen (like the time capsule mentioned earlier) in our nervous systems.

Everyone has had trauma. Any trauma, even small repetitive traumas (i.e., a constantly critical parent or chronic bullying at school), can also create the same effect.  It can produce a behavioral mystery, a riddle.

In Jason’s case, taking exams re-activated his hidden trauma time capsule in its undigested, un-integrated form, along with his distorted beliefs, like “I’m stupid” or “I’m a coward,” just as if it was all still happening in the present. Jason’s buried terror and irrational beliefs shaped a riddle in his life that destructively prevented him from achieving so many of his dreams.

Even if Jason and I had talked about it for months in a more traditional talk-therapy way, we could probably never have guessed the puzzling origin of those five words. Yet, Brainspotting unlocks the riddle of trauma.  BSP facilitated a very direct line to the missing information Jason needed for a solution to the mystery.

During our third and final Brainspotting session, Jason had a profound “A-ha!” moment when, while gazing at another Brainspot, he revisited the traumatic scene in the woods once more. This time, with pride in his voice, he said, “Saying those words was the best thing I could have ever done!” He finally took credit for his colossally creative and intelligent action.

Twenty-five years after the event that changed his life forever, Jason realized the astonishing power of his intuitive act. He began to transform from a person filled with shame to someone filled with pride, awe, and confidence in his innate intelligence. Jason’s brain and nervous system re-organized and re-wired to support his new truth. His trauma finally moved into the past, and in doing so, provided a meaningful and accurate understanding of what had happened (“I survived, I learned something profound, and now I can move on.”)

Each of us has everything we need already inside of us. Jason re-discovered his intelligence and creativity—that was there all along—and then harnessed them to accomplish his goals. Healing is a highly creative act, and creativity spontaneously flows once you take the blocks away. Not all Brainspotting treatments are as dramatic or as fast as Jason’s. But Brainspotting, with its direct access to the body and the deepest parts of the mind, somehow pulls traumatic memories from the subconscious to the surface and quickly resolves them. It re-connects us with our most creative selves. And when our inner vision changes, everything in our outside world is also transformed.

How to find a Brainspotting therapist

There are now more than 13,000 Brainspotting therapists in 22 countries worldwide, and the process is undergoing intensive scientific research.

To find a Brainspotting therapist near you, visit the BSP directory here.