Brainspotting: A Powerful Tool For Actors

Brainspotting to prepare for a role

“My first seizure,” he cried, shaking, “came when I was 8. I was sitting on my horse in the courtyard. My convulsions were so severe that I lost control of the reins and fell to the ground. My father’s horse became frantic and nearly trampled me. Almost too late to save me, my father’s men dismounted and gathered me up until I stopped convulsing.” 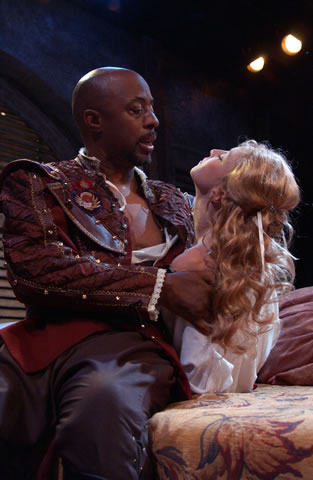 Othello, the great black warrior king from the Shakespeare play by the same name, was sitting right in front of us, weeping almost uncontrollably. The hair on the back of my neck stood straight up.

Moments before, I had been completely mesmerized watching my brilliant friend, Dr. David Grand, therapist and acting coach, as he used Brainspotting to prepare actor David Toney, seated on the couch in my office, for the role of Othello in an upcoming performance. Toney was wearing headphones and listening intently to a CD of music and nature sounds which David Grand developed and produced. (This same soundtrack is included with the book Ignite the Genius Within.) Unlike stereo sound, which is delivered simultaneously into both ears, the Ignite sound instead oscillates back and forth, right ear to left, left ear to right, inducing a relaxed, dream-like brain state.

Brainspotting is a powerful tool for actors to use to prepare for roles.  Grand had guided Toney, with the headphones and sound on, to close his eyes and imagine walking down a long hallway. At the end of the hall, he would open a door and enter a large room with a magnificent mirror at one end. Toney was to cross to the mirror and look at his reflection. Raising one hand and placing it against the mirror, Toney would watch as his own reflection gradually morphed into the image of Othello, the character he was becoming and whose hand met his at the glass.

Gradually the mirror would begin to gently revolve, until now Othello was standing outside the mirror looking at his own reflection, carefully noticing his eyes, his face, his clothing, and how he felt. When he was ready, Othello, now fully in character, was to turn, leave the room, imagine walking onto the stage, into the center of the action and deliver his monologue to use.

It was at this point that I had the sudden, bizarre — and very visceral — sensation that Othello had literally climbed out of Toney’s lap, and that it was Othello himself who was not sitting on the couch, next to Toney, speaking to us! I didn’t exactly see this entity; I just had an intuitive sense that he was there.

Grand then spoke directly to Othello — who, according to Shakespeare’s script, was plagued throughout this life with terrible epileptic seizures — and asked him to recall any incident from his own childhood that felt related to the lines he had just spoken. Instantly, Othello had recounted in great, passionate detail the terrifying circumstances surrounding his first childhood seizure. The thing was, I knew that no such memory was in the play’s script.

Later, when Toney was back out of character, and we were discussing what had happened, I asked him if Othello’s traumatic childhood memory of seizure was related to anything that had occurred in Toney’s own childhood. (Actors often use their own life experiences to fuel their character’s emotional life.) Toney was adamant that no, there was nothing even remotely similar in his own life, but that the emotional impact of this “character memory” of convulsion and near-death by trampling — as well as the sensory details that accompanied it — had felt extraordinarily real to him in every way. Not only that, but it had just “popped up” instantly on its own — Toney hadn’t even had to try.

We were all fascinated by this seemingly impossible development and pondered how this strange “memory” might have been generated. (My eventual discovery of the answer to this mystery was much more exciting than I could have ever imagined then.) Astonished by what I was feeling, I turned to both of my colleagues and said, very spontaneously, “Well, this reminds me of holograms.”

My fascination with holograms

I recalled my utter fascination with holograms that had begun many years earlier in the ’80s. During that time, I had loved visiting the shadowy halls of the Museum of Holography in New York City, sadly long-gone now. There on the walls in the cool darkness, all kinds of bizarre, three-dimensional images, called holograms, eerily poked their way out of the frames in which they lived. Near the entrance, illuminated in the darkness by some invisible light source, lifec the Winking Lady, a life-sized, completely real-looking, three-dimensional woman who grinned and winked at me each time I passed her. Further down the hall a ferocious Doberman lunged at me in the air over my head so realistically that the first, second, and third time I passed him I actually jumped. Both of these holograms were designed so that you could see all the way around to the back and the under side of them — just as you would if you walked around any real object to look at it from all sides — even though they both lived in flat picture frames on the wall. Well, this was just extraordinary!

In the dark central gallery was the museum’s tour de force, an enormous, twinkling pot of gold. It was lit from underneath, so you could walk all the way around the pot and get a close look at the treasure. But if you reached out to touch the gold, your hand sliced right through the air because, of course, there was absolutely nothing there.

How holograms – and character “memories” work

The most intriguing thing about the Museum of Holography, however, was their fantastic explanation of holograms. Holograms are created by using laser beams to take a three dimensional “picture” (or hologram) of an item. like a rhinoceros, that could then theoretically be projected into your living room, and would look real enough to terrify your houseguests.

In addition — if you wanted to — you could break the holographic film negative of that rhino into a hundred pieces. Unlike regular photographic film which would of course be completely destroyed if you cut it into such pieces, every piece of the holographic film would still contain the complete, three-dimensional image of the whole rhino. That is, no matter how many shattered pieces of the film there were, each and every piece could still reproduce a life-size, 3-D, ferocious-looking rhinoceros in your living room!

With holograms, in other words, every part contains the whole.

It was the same for David Toney as he effortlessly evolved into his Othello character and created the “memory” of the traumatic event from Othello’s  childhood.  As with holograms, David could reach into the universal source of imagination, grab one shattered piece and create a complete – and terrifying – memory to help complete his character’s world.